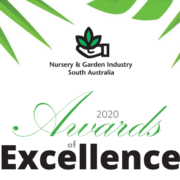 NGISA Awards of Excellence – And the winners are…

Each year the Nursery & Garden Industry of South Australia recognises the best in its industry with the Awards of Excellence which were announced on Friday February 19 at the Stamford Grand at Glenelg to an audience of 180 industry peers.

The judges this year were gardening identities, Kim Syrus, Kelvin Trimper and former garden centre owner Andrew Hutchison who had the hard task of deciding upon the best of the best.

On behalf of all judges Kim Syrus said the level of quality and presentation across the board was outstanding, as well as commitment to customer service.

“Across the board all the finalists had great customer relationships and through the pressure of 2020, all had displayed enthusiasm, innovation and loyalty to their customers.”

The Best Garden Centre in SA Award went to Barossa Nursery in Nuriootpa.

Described as ‘the complete package of what a great garden centre should be’, judges said Barossa Nursery was attuned to their customers and their merchandising of greenlife through to giftlines was exemplary.

“Once again they understand their customer base and have linked pets and plants very well to create a unique experience,” the judges agreed, “with Audrey the alpaca and their macaw featuring strongly.”

“They fill the shop to overflow without quality or presentation suffering and staff enthusiasm is infectious.”

The other major awards were for the production and allied areas of the industry.

The Best Specialist Nursery in SA Award went to Living Colour, based at Penfield in Adelaide’s northern suburbs. Living Colour are the leading grower of seedlings and potted colour in the state.

Two special industry awards were made by NGISA for 2020.

The Doug Smart Award of Merit for someone who is not a member of NGISA but has made a major contribution to gardening went to rose ‘guru’ Kelvin Trimper.

The NGISA Award of Honour for contribution to the industry was award to Mr Chris Physentzou, owner of Adelaide Plant Growers, a wholesale nursery south of Adelaide.

Other awards announced on the night were:

The symbol of Excellence for Retail Garden Centre in Australia

OUR SPONSORS: NGISA are proudly supported by our major sponsors.